School dedicates butterfly garden to student who 'left us too soon' 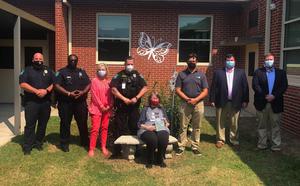 SROs and others made vision of garden a reality for Thomas Stork, who lost his battle to cancer back in 1996

WEST COLUMBIA, SC -- Thomas Stork was a Saluda River Elementary School student when he lost his fight to cancer back in 1996.

Twenty-five years later, a vision for a garden in his memory has been brought to reality, thanks to many hands, among them the school resource officers.

West Columbia Police Officer India Taylor, a former SRO at what is today Saluda River Academy for the Arts, began working with members of the student council prior to 2018. Later, the school’s current SRO Chris Yarborough -- who knew Thomas Stork as a child and also attended Saluda River --  continued working on the project with school and community members, including his father, to complete the butterfly-friendly garden. The plants include yellow yarrow, rue plant, milkweed, bee balm, rosemary, and swamp lily.  Welding students from the Lexington Two Innovation Center created a metal butterfly sculpture that adorns a wall near the garden.

A dedication ceremony at the school this week included Yarborough, member sof the school community, some members of West Columbia City Council and city police department, along with Thomas Stork’s mother, Carol.

"The community surrounding Saluda River Academy for the Arts plays a critical role in the overall success of our school.  Every child is of utmost importance to us and we feel fortunate to be able to show our support for the Stork family through this memorial,” said Principal Jim LeBlanc.  “I am appreciative of the partnership with the West Columbia Police Department, Officer Taylor and Officer Yarborough, and the Stork family who helped see the memorial to completion.

“The joy and inspiration that the garden has already brought students and staff as the beautiful flowers have bloomed and butterflies of many types have frequented has been truly remarkable to witness," LeBlanc added.

"Thomas left us too soon. Even at a young age, he touched the lives of many,” Yarborough said.  “The butterfly garden represents hope, transformation, comfort, and positivity -- qualities that Thomas would like to see in the world today."